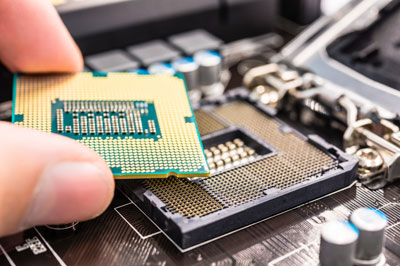 A computer processor, also known as the CPU (Central Processing Unit), is the brain of a computer; it’s what does the “thinking”. The computer processor knows a small number of primitive instructions (ie. add, subtract, move data) and these basic instructions, executed at lightning speeds, do everything a computer can do. When shopping for a CPU, unless you have a very specific type of computation you are looking for, the general rule of thumb to keep in mind is, you get what you pay for.

The CPU socket provides a connection between your CPU and the motherboard. The computer processor sits in the CPU Socket slot on the motherboard and can be easily replaced without the need to solder. As new processors come out, the architecture changes, requiring the structure of the motherboard sockets to change accordingly. If you will want to replace your CPU in the future, you will have to either purchase a faster CPU of the same socket type, or upgrade your motherboard if you want to purchase a processor with a newer socket type.

A CPU core can be thought of as an independent processor within a physical CPU. These cores execute programs independently from each other, which substantially increases the performance of your computer. So if your computer has 4 cores, you can run up to 4 programs simultaneously. If you run more than 4 programs, cores begin to “juggle” more than 1 program, and share the resources of a core. If you only run 1 program or game in a 4 core system, does it execute it on all 4 cores, then? That depends on the program and how it was designed. A core executes a string of instructions from any given program called a thread. These “threads” is what the cores are juggling. If a program or a game supports multi-threading, you can take advantage of your extra cores to increase performance. If you run a single-threaded program or game, you will not see performance boost merely by increasing the number of cores. The program you are running must be taking advantage of the extra cores to benefit from them.

Many processors on the market now support integrated graphics. That means that, if the motherboard supports it, you don’t need to buy a video card separately, and instead have your processor do the video processing. Normally, a processor that does not support integrated graphics, will require that you buy a discrete video card. If you plan on doing gaming, photoshop, video editing, or any other video-intensive activities, you should still purchase a separate video card as they are much faster at processing video than CPUs are.

The new Turbo Boost technology by Intel and Turbo Core technology by AMD allows a processor, if sufficiently cooled and powered, to temporarily increase its clock speed to provide extra performance. Unlike overclocking, this is done completely automatically, without your need to worry about. Needless to say, the amount of Turbo Boost a processor can attain reflects the increase in the price of the processor. For example, the 3.3GHz Core i7-3960X Extreme Edition is able to Turbo Boost to a frequency of 3.9GHz without the need to overclock. You have no control over this feature, but it’s good to know what your processor is capable of.

Nearly every processor on the market today is 64 bit, with majority of applications designed for 64 bit processors. That is to say, a processor can read/write more data per clock cycle as opposed to previous generations of CPUs. This provides a significant boost to performance, as well as allowing much more RAM/Video Memory to be installed. 32 bit processors are obsolete at this point, and should be avoided.

Caching is a means of temporarily storing important data for quick access. Memory data that the processor access often will be stored in the cache, so that the next time it needs to access it, it checks the cache first. The advantage of caching is, although accessing RAM is extremely fast, processor cache is much, much faster, and gives your computer a huge speed boost. More cache, however, is also more expensive. Processors usually have 3 caches Level 1(L1), Level 2 (L2), and Level 3 (L3).

Level 2 cache is larger, slower, and functions just like Level 1 cache, except for L2 cache feeds instructions to L1.

Level 3 cache is larger than L2 cache, but slower (due to sharing across all cores), and feeds instructions to L2 cache.

As a rule of thumb, the more memory you have in all 3 caches, the faster your processor will perform, although the performance gain is logarithmic.

Thermal Design Power (TDP) rating indicates how much power a processor will consume at full load. If you have a 1000W power supply, for instance, you do not need to worry about this. However, if you have a 400W power supply, combined with a high end video card, you might not have enough to power all of your components, including the CPU. LGA 1155 sockets consume 35 to 95 watts of power, whereas LGA2011 socket consumes 130, therefore the LGA2011 TDP is 130. Keep in mind, when purchasing a processor, that the motherboard is able to handle your processor’s TDP. An inadequate motherboard could burn or even catch fire if you are able to run the CPU at full load, so that is worth noting.

Overclocking is modifying your motherboard’s frequency to force the processor to operate faster beyond its standards. Overclocking may be risky as it puts a huge stress on your computer’s components, and even cause permanent damage if not done correctly. This topic is beyond the scope of this article, but in general, it is not recommended to overclock your computer – just buy a faster processor.